Let me formally introduce you to my notebook-cum-planner-cum-diary-cum-life!

Here are the pages with the New Balance Feral Collection adverts… cut and modified to fit the pages. Doesn’t exactly leave a lot of space for notes but I don’t care. It looks pretty (:

So here is how it starts off…

The notebook has completely blank pages then I measure and mark the corners of the boxes for each day. The boxes are then free-handed… cos rulers are so le-chey (cumbersome). 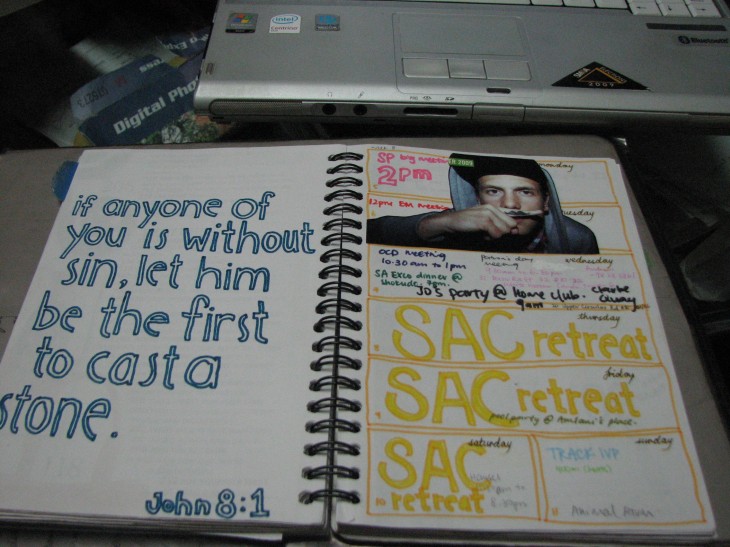 Days and dates are added accordingly. And depending on what ‘speaks to me‘ from various magazines, I cut them out and add them to the book for variety and colour! (:

Everyone needs a bit of colour in their life.

Every two pages/weeks or so, I insert a “break” and dedicate a bit more space to things that deserve the space. hahas. 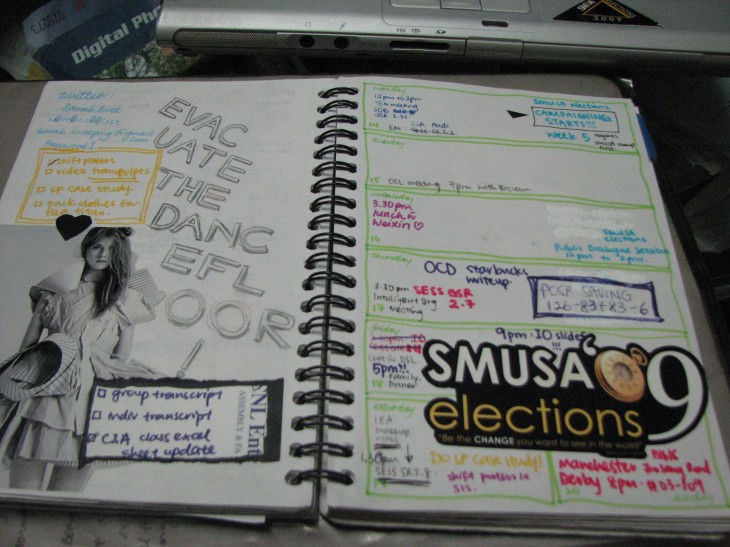 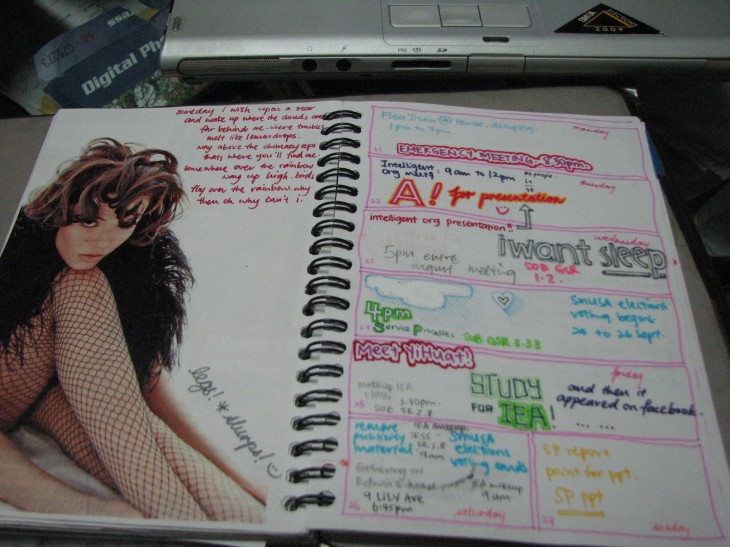 And the rest of the space is kept for meetings, assignment due dates, to-do lists, appointments, etc.

Little, somewhat time-consuming (these things don’t magically cut themselves and become self-adhesive on its own y’knw!) things make me happy. (:

About a decade or so ago, say “Korea” and people think of kimchi.

Say the same thing now, and chances are, housewives and schoolgirls will spew a myriad of names of Korean musicians, TV personnalities, movie stars, drama serials, and the like. (This of course, disregarding the disparity of North and South Korea – fans don’t have time for this.)

Korea has set foot in many industries like steel producing, automaking, consumer electronics, shipbuilding, robotics, and needless to say, entertainment.

So it’s interesting to see popular Korean personalities do the same – dabble in a domain other than their own.

I can’t say that I’ve caught the Korean wave myself, but I was, and still am deeply obsessed with one particular drama serial – Princess Hours (Goong).

If you watch it, you’ll be absolutely smitten with Chae Kyeong and Shin. I was. 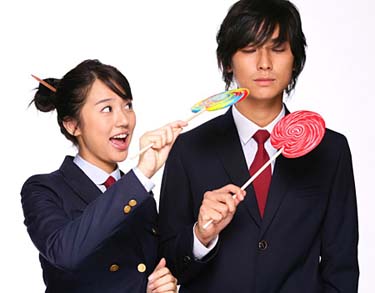 I recall one episode when there was a scene whereby Shin (played by Joo Ji Hoon) was bathing, and the audience was treated to frames of him half nekkid. (Doesn’t nekkid sound more naked than… naked?) I was having a simultaneous conversation over MSN with my friend who was equally obsessed. And we launched into a fury of wanting to be random toilet objects like the carpet and towel because they got to see Joo Ji Hoon in his full glory.

Anyway. The great part about this is that these actors go into other areas like singing… and modelling. And most of the time they do a pretty good job of it. 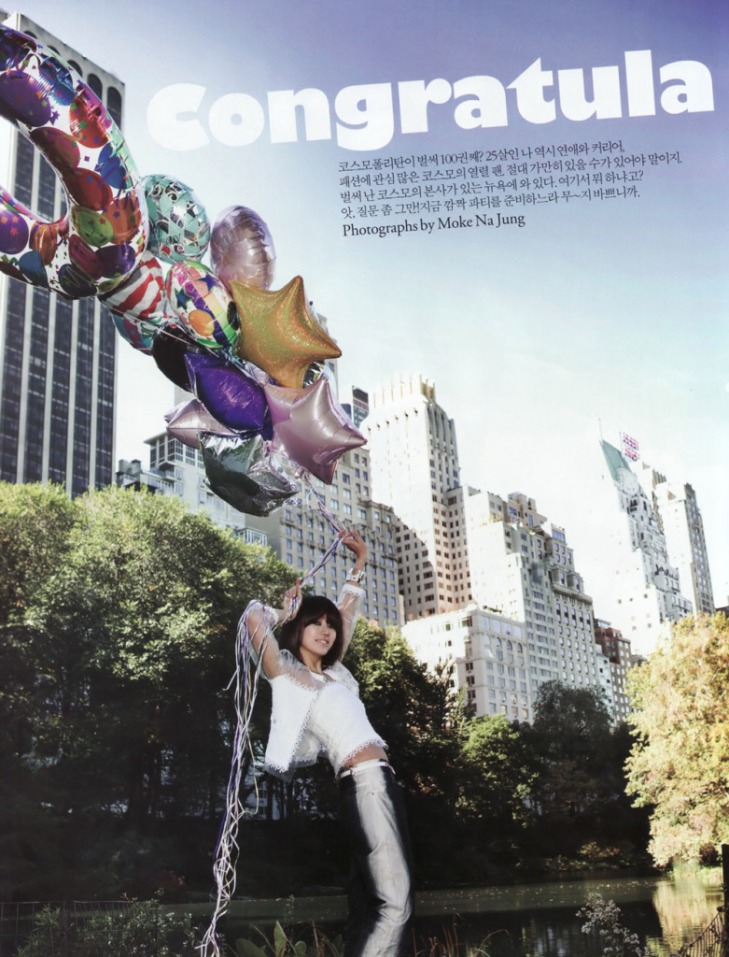 I think if you’re an actress in Korea, it’s inevitable that you fall into a big hole along with the other new artistes called “cute trap”. Luckily, this isn’t as irksomely and irritably cute as what you’ll see on TV. 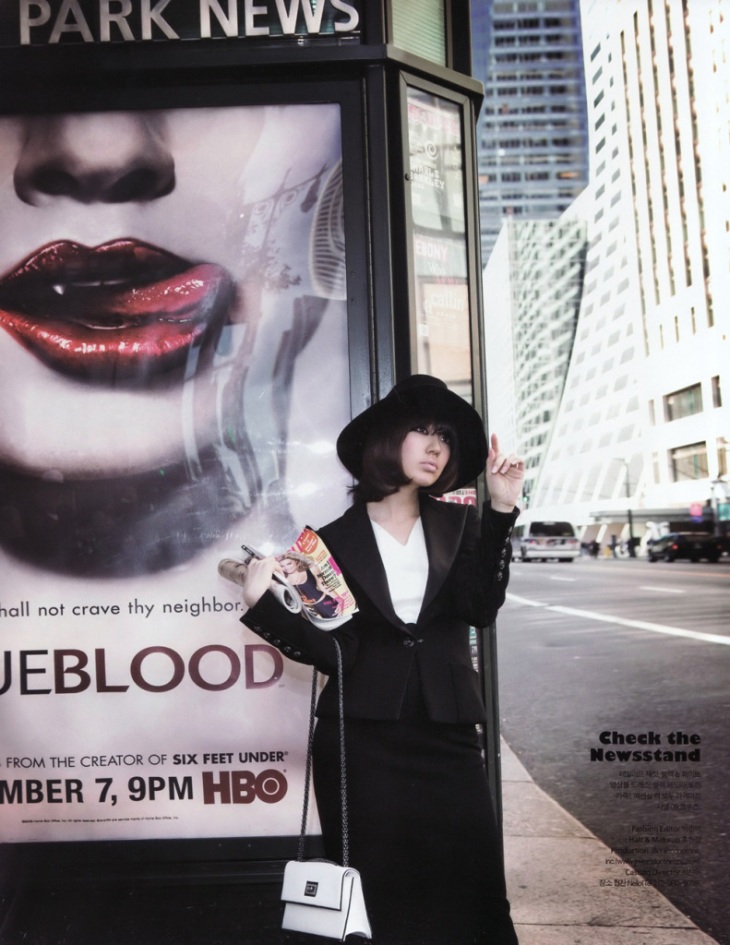 What I think was her best shoot (and most uncharacteristic of her) to date.. 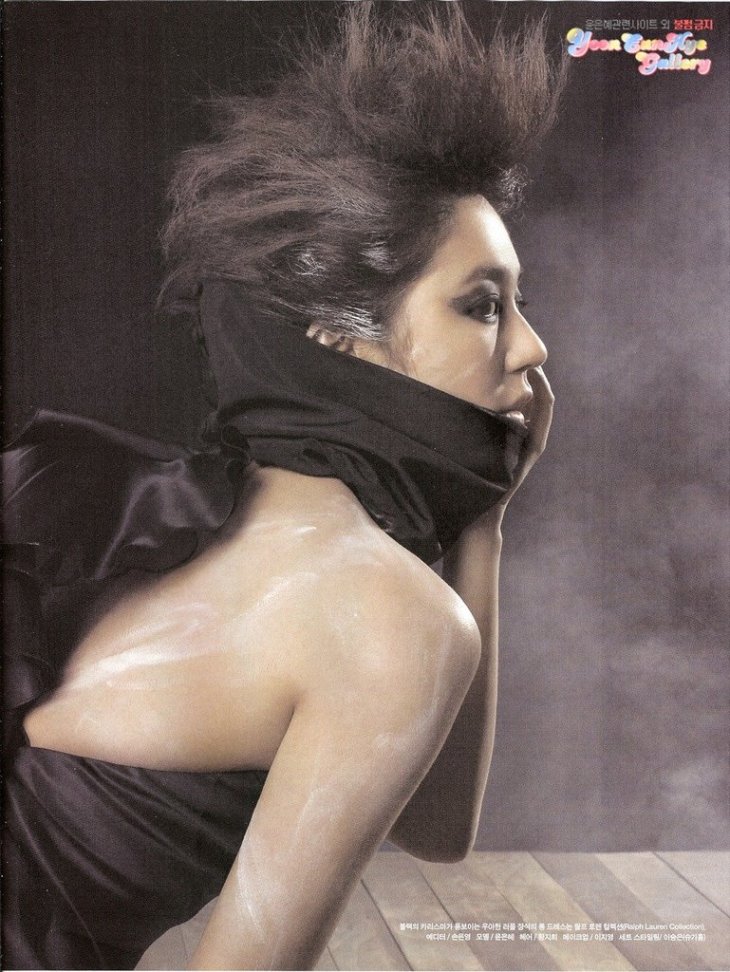 Strange… but it gets more surreal when a celebrity stops becoming a celebrity in a photoshoot. 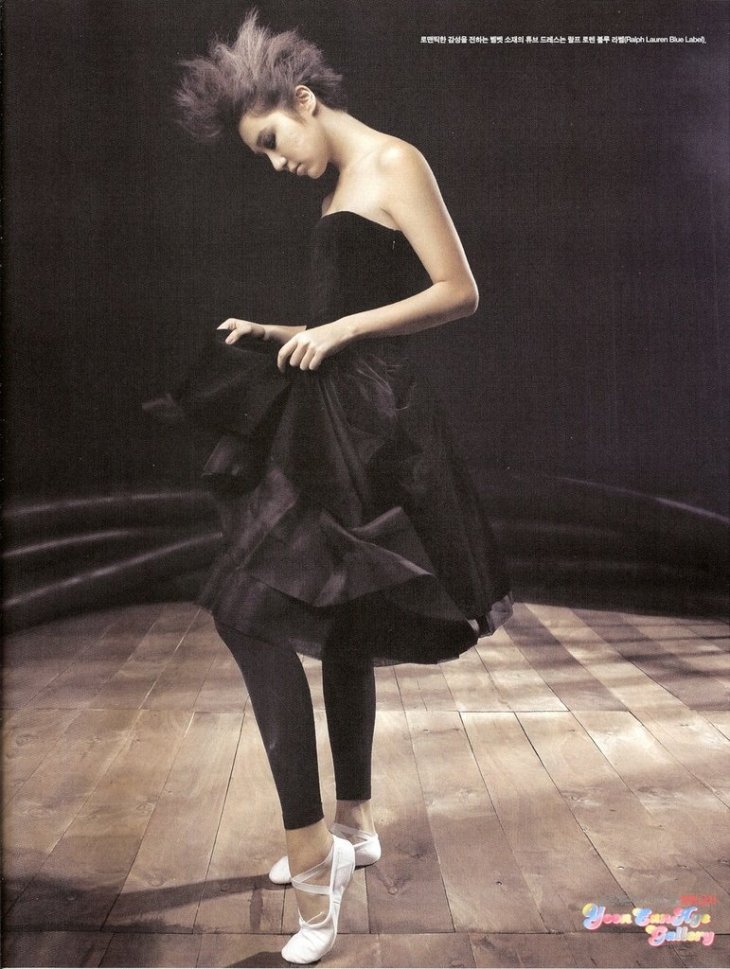 I have to add that her fans did not appreciate this photoshoot one bit.

“sometimes i just don’t understand haute couture…why (do) they (have to) make her (look) so ugly?” 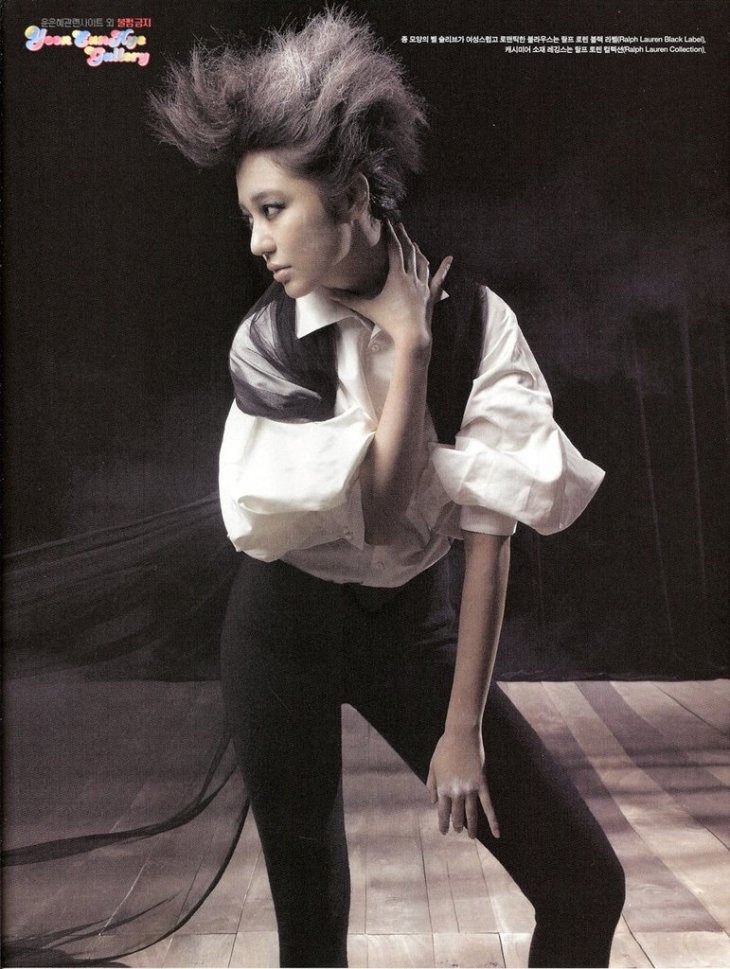 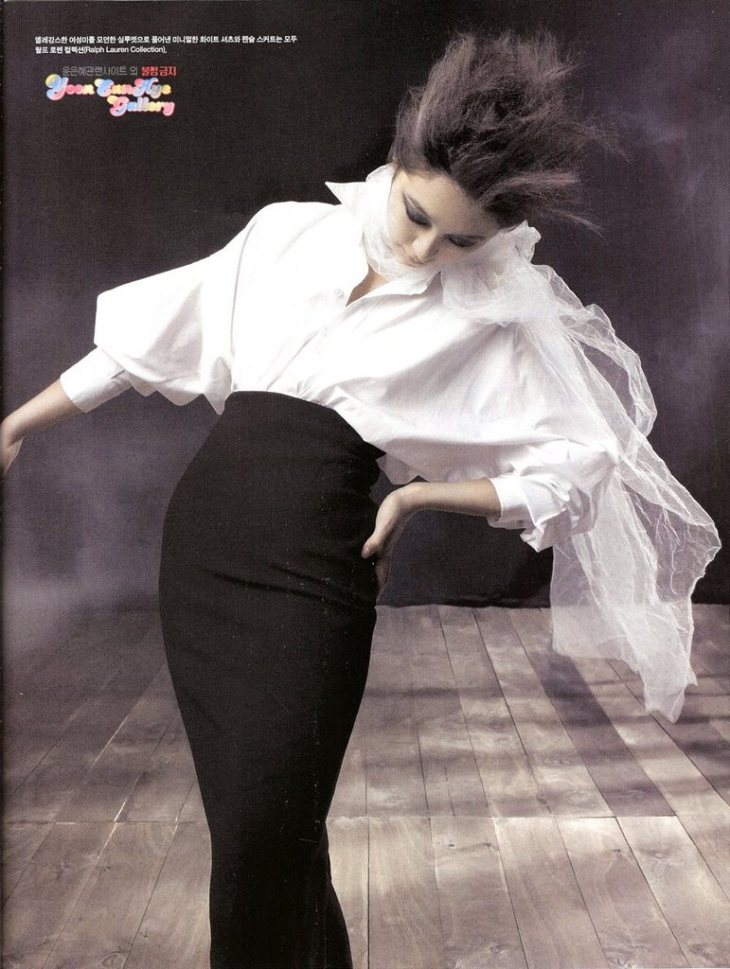 And here I am thinking it’s pushing boundaries for her

If you have one or two Singapore fashion blogs on your reader, chances are you would have heard people like Stephie and Dottie of Fashionation wax lyrical about the wondrously affordable and design-savvy footwear and accessories label – Charles & Keith. 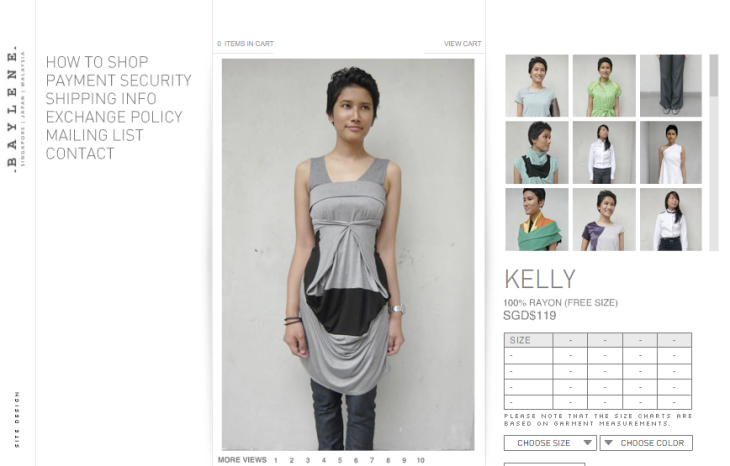 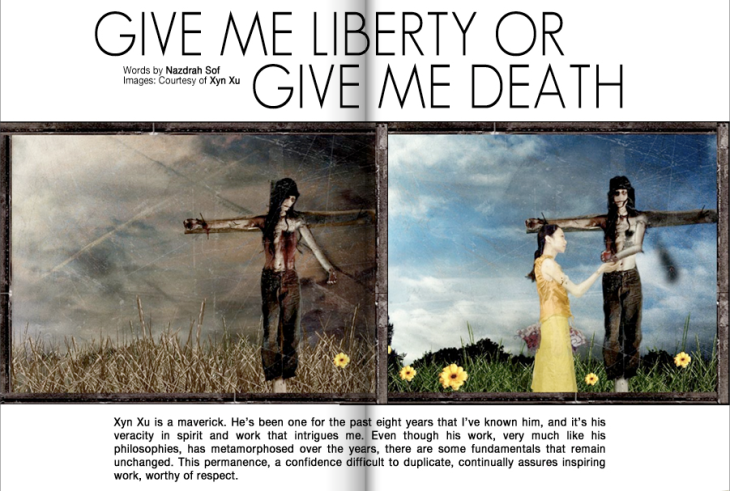 I loveee this look with the silver pants and white crisp blazer and shirt. I am so going to get those silver leggings from American Apparel! I’m not sure about sizing though. Help? 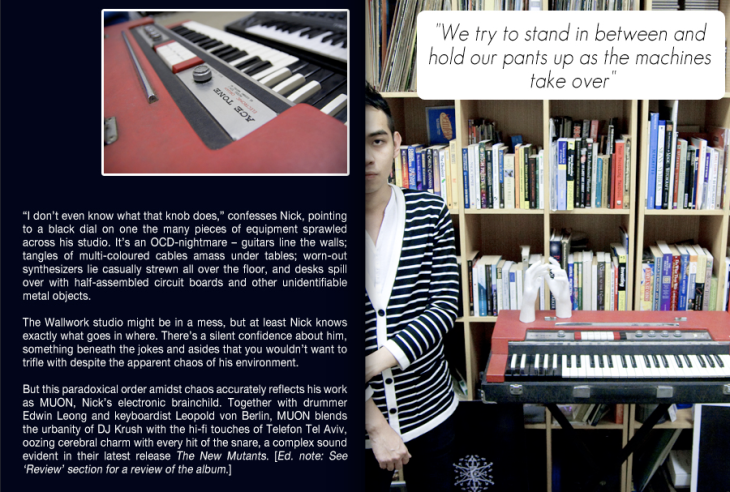 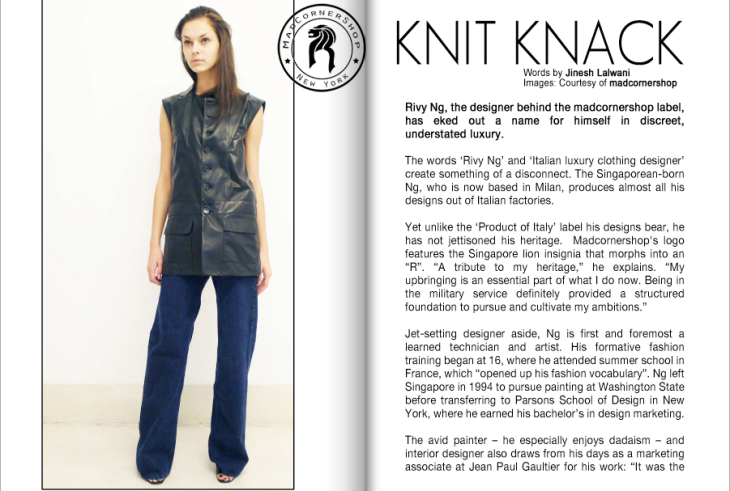 All these amazing images are from their lookbook, which I snatched off the shelves in the store, but you can also view them online.

Like the Fashionation girls previously mentioned (argh I really can’t find the link to their post! – help again?) their styling is laudable. Their budget must be pretty admirable too!

I guess they target a really wide range of customers – from teenagers to tai tais (something like socialites) and they are highly successful in terms of branding and selling. They mostly use tall lanky caucasian models strolling the streets of some faraway European city.

Why not a local model, a local venue? I think people should slowly be able to accept local faces or not feel that they water down the image of a brand.

Plus, see what Harper’z Bazaar Singapore did with our landscape! 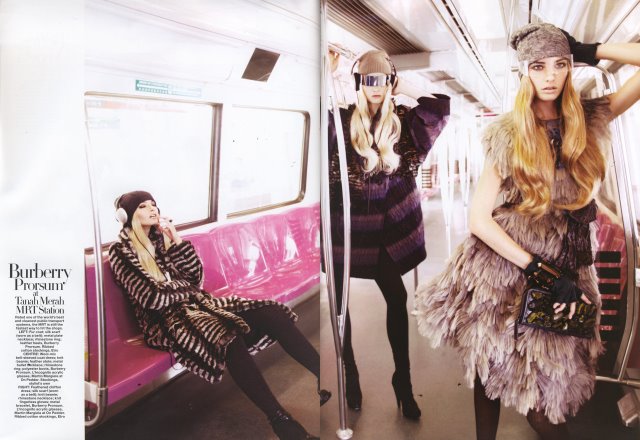 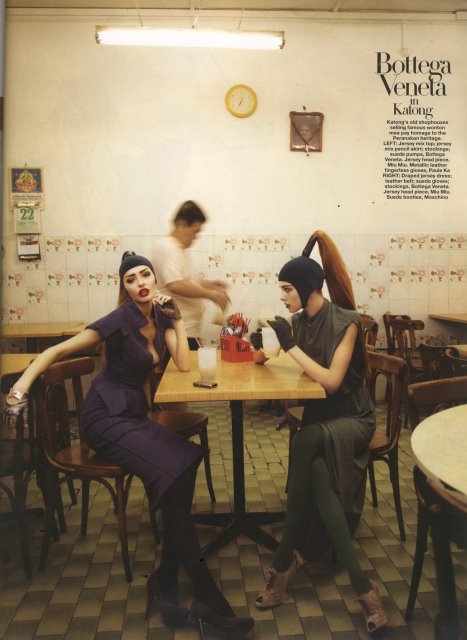 But well, to all those overseas (like The Clothes Horse, if I did not remember wrongly), who want a piece or two of Charles & Keith, their bags, belts, sunglasses and shoes are available online and they ship internationally!

All prices on the website are stated in USD, and they are sadly, more expensive than what we see in the stores, even after currency conversion!

You know it’s summer, or it’s June, when the magazine stands are strewn with strings of words like “BEST BIKINI BUYS”, “THE SWIMSUIT ISSUE”, “WHERE TO SPEND YOUR SUMMER” blah blah blah…

I don’t really like being in the sun. I’m quite fair, I can never get a tan no matter how long I stay in the sun, I only turn red and peel. That hurts. Also, I’m not anywhere near Angelina Jolie or Cameron Diaz’s shape, so even if those spreads have figure specific reccomendations, chances are girls like me will still end up looking like carelessly swaddled lumps of flesh.

Point is, I got two magazines – Nylon Japan and ViVi (Asian Edition) to tide me over this month of bikini bombardment.

From the looks of it, Japan seems to be quite preoccupied with gladiator sandals!

Like Vogueite, I am getting a bitttt tired of seeing gladiator sandals around. But those floral heeled sandals really appeal to me!

I love those lace trimmed navy blue shorts in the last picture! I shall see if I can modify any of my shorts 😀

I’m more accustomed to the clean, neat, but stylish layouts that most local magazines subscribe to, but I’m completely intrigued by the messy, chaotic, cutouts, intermingling text and pictures just makes me want moreeee.